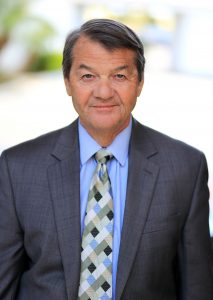 Mr. Wickers opened the Law Office of Rodney W. Wickers in 1992 in Torrance, California, and is the founding partner of our law firm which is now titled Wickers, Wickers and Admans, LLP, serving the South Bay, Los Angeles County and Orange County areas.  Mr. Wickers has been selected for the SuperLawyers Top Rated Trust and Estates Litigation Attorney list in 2021-2023, for his Trust and Estate practice area, in Southern California.  In November 2021 Rodney W. Wickers was recognized for his experience by being included in the Los Angeles Business Journal list for Leaders in Law.

As a result of his over forty year career in law, Mr. Wickers has a wealth of experience that he shares with his collogues, attorneys from other firms and clients alike.  Mr. Wickers has handled more than 200 cases in his  legal practice career including, many court matters in business litigation trials, evidentiary hearings on conservatorships and hotly contested estate cases.  He began his career as a Judge Advocate General for the U.S. Military, Air Force which is where he honed his trial skills.  Mr. Wickers is an aggressive advocate for his clients when necessary but always attempts to resolve matters with cooperative efforts and reasonable settlement discussions first.

Mr. Wickers undergraduate studies began at Loyola Marymount University and completed at the United States Air Force Academy.  As a student, he was initiated into the Alpha Chapter of Colorado in recognition of his high scholastic achievement in the field of Economics and received his Bachelor of Science from the Air Force Academy in 1973.

He then attended law school at the University of California, Hastings and worked on the Hastings Law News as Managing Editor.  In 1974, he was initiated by Pomeroy as a member of the International Legal Fraternity of Phi Delta Phi.  Mr. Wickers graduated in 1976 receiving his Juris Doctor.

As a new lawyer, Mr. Wickers worked in the United States Office of the Staff Judge Advocate in a number of different states where he received a Certificate of Designation from the Department of the Air Force as a Judge Advocate.  He received a diploma from Air Command and Staff College in 1984 for completing their program.  Throughout his time in the United States Military he also held such positions as Trial Counsel, Defense Counsel, and Aerospace contract negotiator.

In his spare time he enjoys cycling at the beach, playing golf, reading non-fiction books, and spending time with his grandsons.  He has been married for over thirty years, has two adult daughters and two grandchildren.